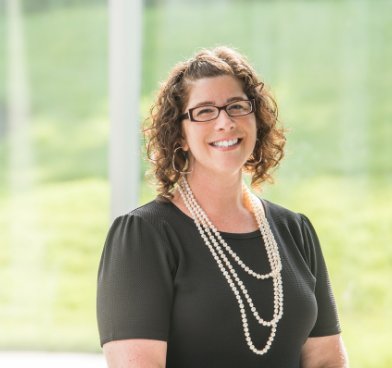 In February the Jewish Federation of Howard County welcomed our new Program Director, Shauna Leavey. We caught up with Shauna to learn more about her new role and how her values as a Jewish educator influence her goals for Federation programming.

We’re very excited to welcome you to the Jewish Federation, Shauna! Can you tell us more about your role here?

As program manager, I will manage PJ Library in Howard County programming and Federation outreach programs and events. I’m hoping to make strong connections with the Howard County community and help connect community members with the aspects of Federation that appeal to them most and spark their passion.

What is your professional background?

I have a strong background in formal and informal (non-classroom based) learning. I earned a master’s degree in Jewish Education and over the past five years have gravitated towards more non-traditional educational opportunities through programming and engagement. My goal is to expand people’s options for Jewish engagement, particularly with family-based programming.

What motivates you to work for the Jewish community and do what you do?

My husband once said to me, “You know what Judaism does really well? Birth and death.”  We know how to support people at every stage in life. Judaism is set up to do that.

As an academic, I studied Judaism from a sort of sociological viewpoint, rather than a religious one. I feel like in the Jewish community, you are set up for success because you are set up to be supported through every stage in life.

I think the community aspect of Jewish life is what keeps it going and draws people who may have been disconnected back to Jewish life.  The idea that we are set up to live amongst others, thrive amongst others, and be supported by others is what Judaism does best. I want to allow as many people as possible to feel that they are a part of, important to, and supported by that community.

Right now you live in Owings Mills, Maryland, but you were actually raised in smaller towns in Indiana. What has been your personal experience of Jewish communal life?

I was raised in a few communities in the mid-West. In all of them, my family affiliated with a Reform congregation and was very active in all aspects of Jewish life. Our family also had deep ties to the religious school—my brother and I attended, and my father was so enthusiastic about our schooling when we were bnai mitzvah that he actually became a religious school teacher himself. By the time I was in high school, I was a teacher’s aide (madricha). Because I had a rabbi who understood me very well, I always had a positive outlook about Jewish community work and education. I became a Jewish educator because I loved religious school—I thought it was the best place to be!

How do you plan to bring Jewish values into your role?

The idea of b’tzelem Elokim, that every person is created in the image of something holy, really speaks to me. I think that if you hear that idea over and over, that inside you there’s a spark, at some point you will start to feel it. I want everyone to feel not just that there is something for you to do at Federation or a role for you at Federation, but that you are important and vital to the work and that we can’t do it as well without you.

It’s a tie between Tu B’Shvat and Sukkot.

Because I like nature. I actually didn’t have a sukkah until after I was married. But after I married, I really wanted one, so my husband built our first sukkah. I geeked out, hung lights, decorated it and totally loved it!

I like to cook and eat and hike and read and quilt. And all or none of those things can be done with my family and they are just as enjoyable.

You have a 12-year-old daughter and twin 9-year-old sons. How has having a young family influenced your perspective as a Jewish educator?

Having my own family has helped me understand how every Jewish family is in its own place, and it’s made me aware that Jewish education is a judgment-free zone.  It’s hard—being a family, being a parent, being in charges of other humans—and whatever way you can get your family Jewishly engaged is what’s right for you.

I think now I also feel things a little more deeply, like the idea of passing on the feeling of wanting to be lifelong learners, not just within Judaism but within all things. I think it’s important for kids to understand that just because they don’t connect to something today, that doesn’t mean they won’t someday or that it won’t be important to them at some point, even if it’s five years down the road. Your job as a lifelong learner, every year, every day, every night, is to ask questions and keep searching.